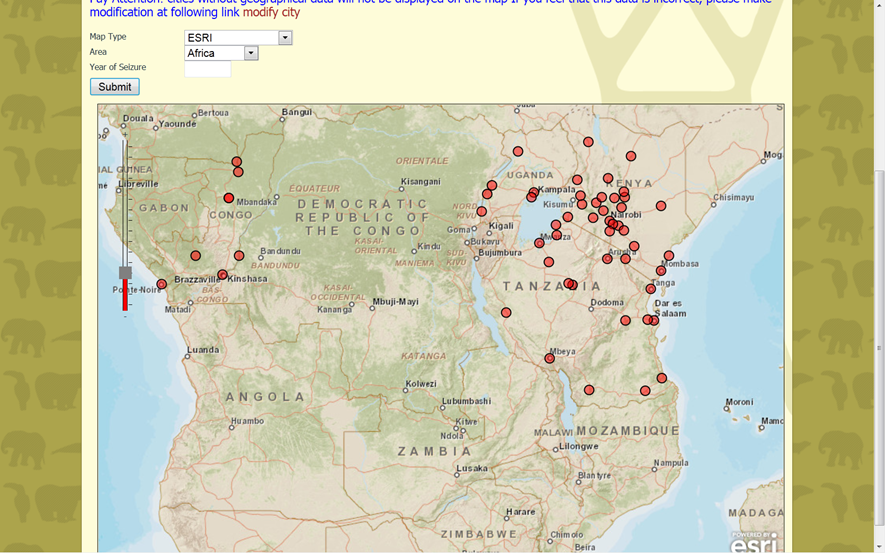 Wildlife Enforcement Monitoring System (WEMS) is an environmental governance project and its objective is to assist monitoring trafficking and illegal wildlife trade (IWT) through a joint effort carried out by United Nations bodies, national governments, private industries, civil society and research institutions. WEMS brings together national enforcement institutions to a common data collection and reporting mechanism through the WEMS 2.0 information system.  WEMS  helps in providing analyzed information electronically to all partnering national enforcement agencies and international policy makers including INTERPOL, UNODC, WCO and CITES Secretariat. Selected information is shared with the public for bringing awareness about wildlife crime. Research and analysis of the crime data is carried out through designated research institutions which will also carry out policy analysis identifying the trends and reasons for non-compliance.

The need of WEMS was realized during a time when poaching and illegal wildlife trade was rampant around the world. Several national governments did not even have the provision to systematically record incidents of poaching and seizures.  In 2000, when the National Legislation Project of the CITES Convention evaluated 136 of 146 member states Party to the convention, it found that only 37 (26 per cent) achieved the highest level of compliance with the provisions of the Convention; 47 Member States (32 per cent) did not meet the criteria even partially. Furthermore,  An important initiative, known as TIGERS (Trade Infraction and Global Enforcement Recording System)  that was developed by the secretariat to process reports of wildlife crime and illicit trade, identifying crime trends, methods and routes from a variety of sources failed to achieve its mandate due to Parties not providing complete data on infractions. In 2002, the UN’s Commission on Crime Prevention and Criminal Justice in its report Progress made in the implementation of Economic and Social Council resolution 2001/12 on illicit trafficking in protected species of wild flora and fauna, (E/CN.15/2002/7), noted that, in the absence of an exhaustive and reliable register of wildlife trafficking, together with indicators of the number of undetected cases, an assessment of the scope and nature of the problem becomes difficult.

In 2003, the United Nations, through its Economic and Social Council, urged member states to adopt preventive measures, as well as to review their criminal legislation with a view to monitor offenses relating to trafficking in protected species of wild flora and fauna. The UN General Assembly resolution, document A/CONF.203/PM.1, highlighted the need of comprehensive approach in combating wildlife trade including measures that builds on areas of success, remedies deficiencies and weakness in laws and enforcement efforts. The absence of measurable data on the violations of wildlife trade regulations lead to less penalization, rare application of appropriate sanctions and penalties mostly remained relatively low.

The challenges in combating wildlife crime was also highlighted during the conference of parties of the CITES convention and the lack of information and failures of information system were noted (See CITES CoP13 Doc. 23, Enforcement Matters).The CITES Convention can only be effective to the extent that member States enact and enforce the specific provisions.

The first step was to build a database on wildlife crime providing both spatial and non-spatial information on poaching and illegal transit of endangered species (nationally listed and listed by the CITES Convention). Designated partner NGO’s from 42 Asian countries were requested to collect information through information disclosure law and input this information in a common information sharing platform. The database was designed in line with the INTERPOL ecomessage. The first prototype of WEMS was released in 2006 using data from Japan. The prototype had four major outputs; 2. A data-clock which showed the season and year of illegal trade of a particular species. 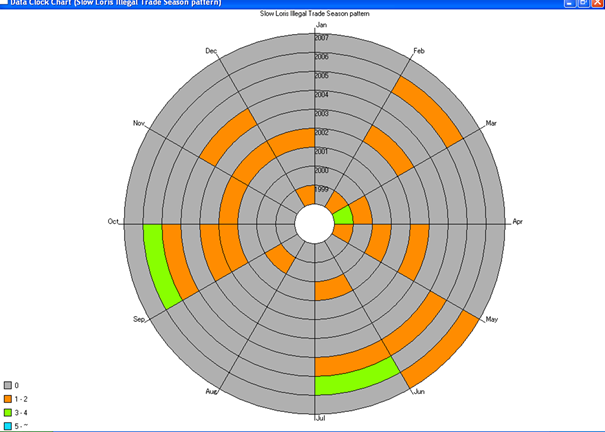 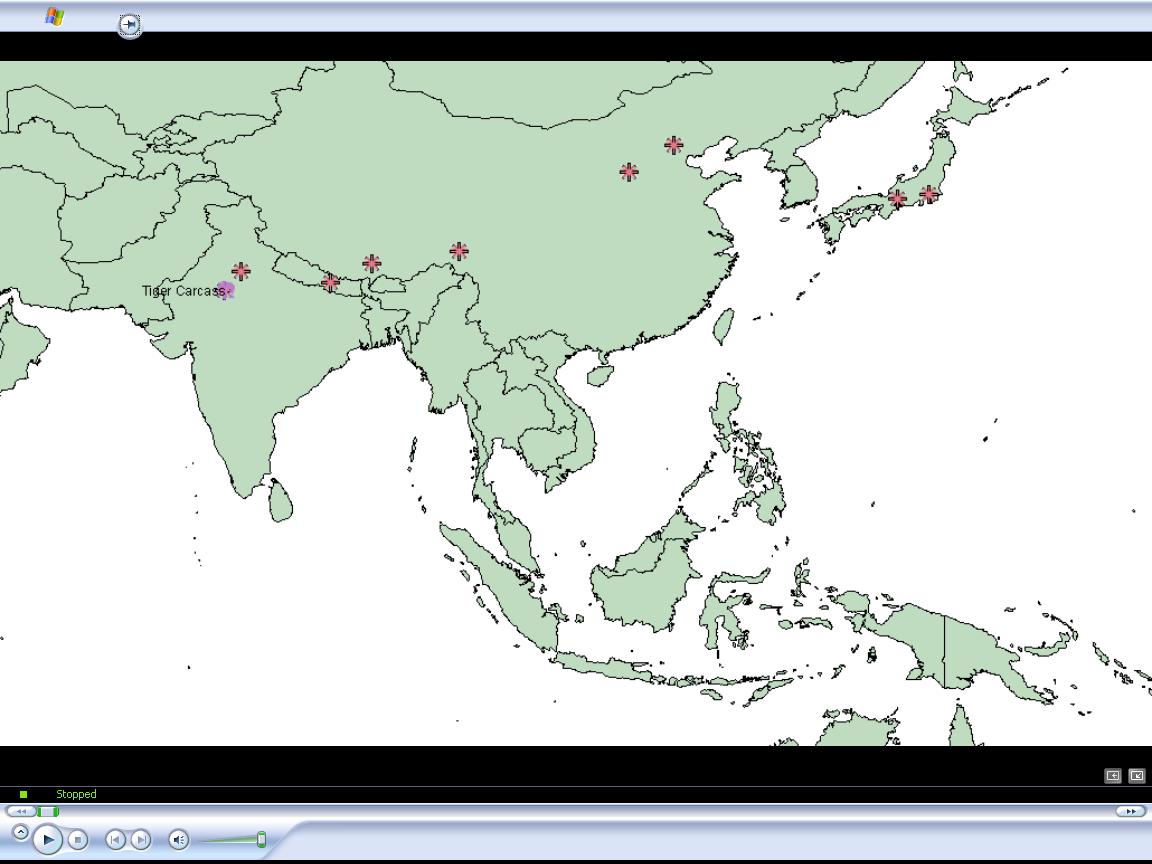 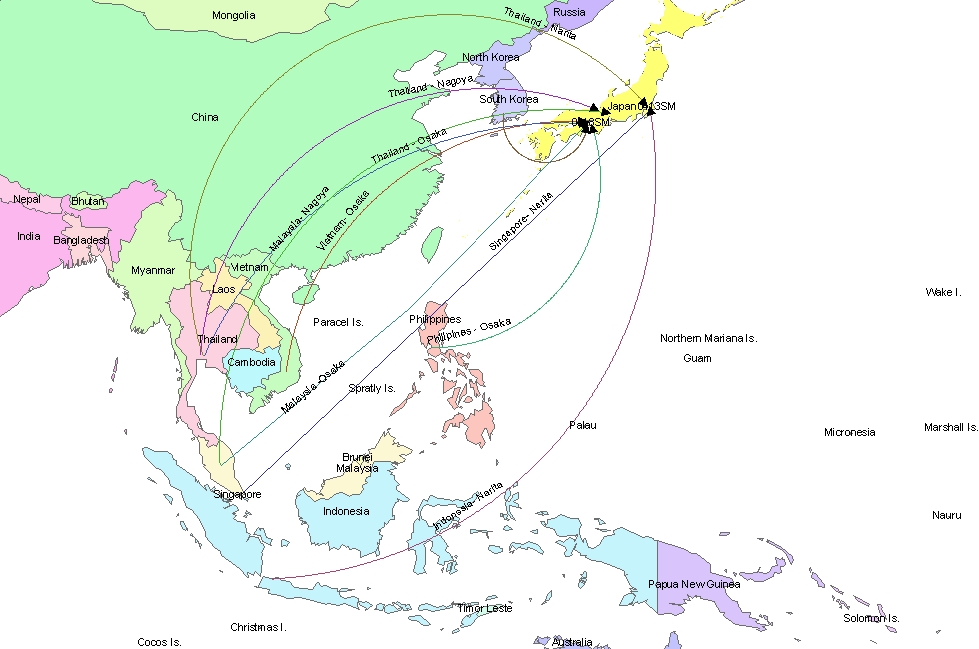 4.  A digital eco-message generated automatically from the input data

Redesign of WEMS and Presentation to the International Law Enforcement Community

WEMS system was presented at United Nations University in August 2006. It was later demonstrated to the parties of the CITES convention during CITES CoP 14 held in the Hague in 2007. 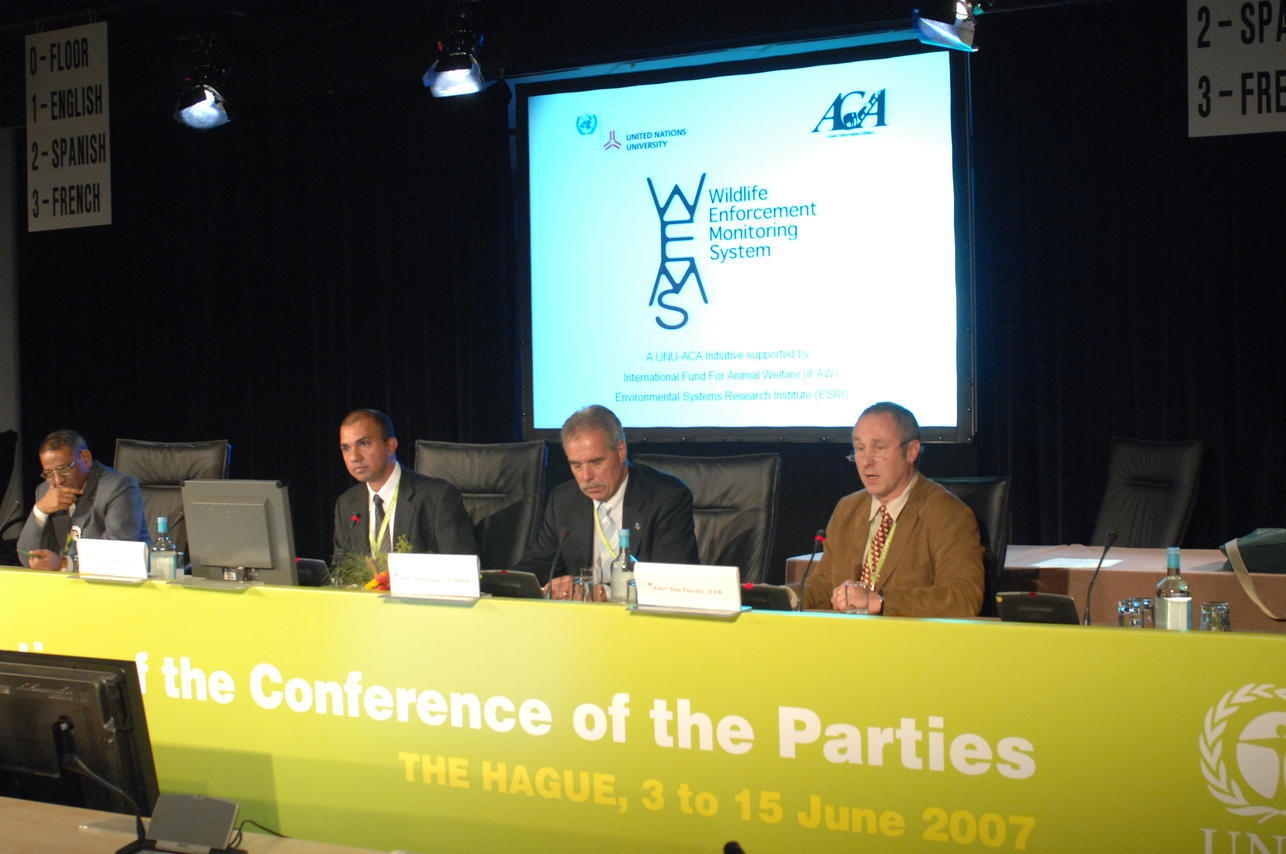 WEMS Presentation at the CITES CoP 14 Meeting in Bangkok

After 2007, United Nations University decided to re-constitute the WEMS system to the needs of governments and the system was redesigned to cater to national wildlife law enforcement agencies. The re-designed version of WEMS was presented at the INTERPOL Wildlife Working Group (IWWG) meeting in Beijing, CITES Enforcement expert group meeting held in Ashland, Oregon in June 2009 and the CITES CoP 15 held at Doha in March 2010. 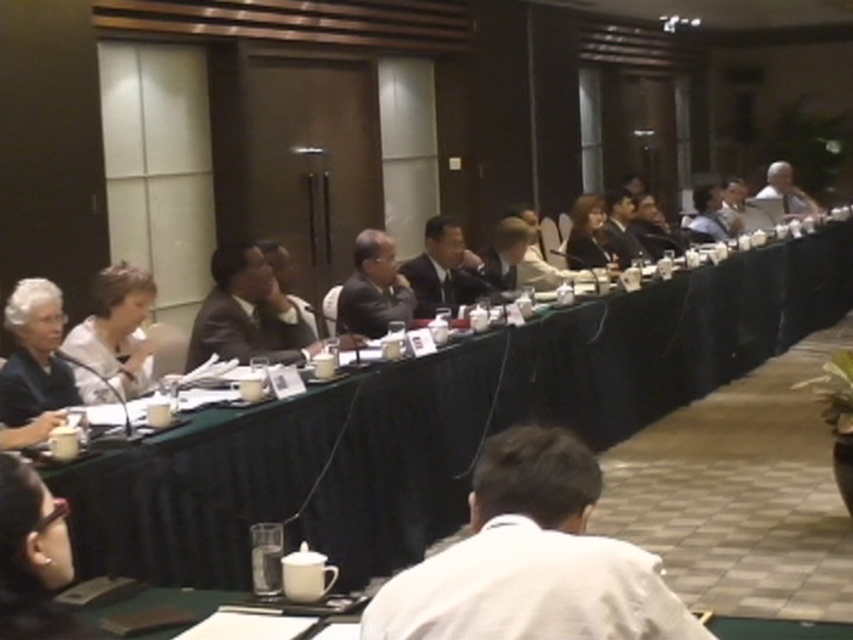 In 2011, United Nations University in partnership with Faculty of Geo-information Science and Earth Observation of University of Twente and Lusaka Agreement, implemented WEMS in four African countries which were member states to Lusaka Agreement.

On July 2011, the Minister of Forests and Wildlife of Kenya Dr. Noah Wekesa inaugurated the launching of WEMS in four East African countries – Kenya, Tanzania, Uganda and Congo Brazzaville. . 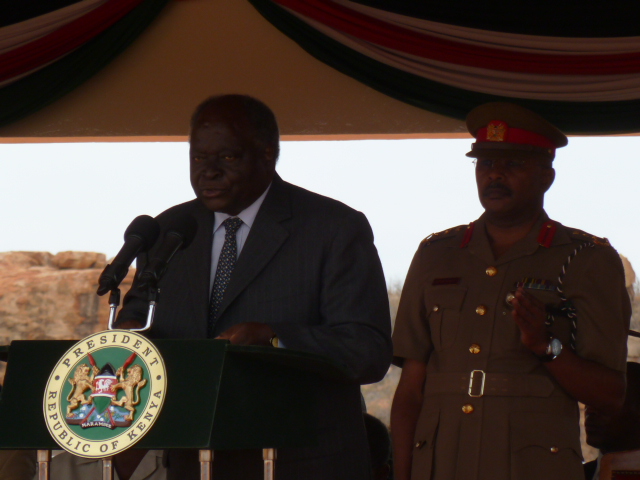 Since then, WEMS transformed to a functional transboundary geospatial decision support system used by the four Lusaka Agreement countries. The countries in the pilot phase met for two training sessions and the database was restructured in such a way that WEMS will act as a national and regional database. While all incidents of poaching and seizures are input into WEMS by the participating country; only  information that has transboundary relevance is shared with LATF. The LATF member states agreed to this clause and WEMS became fully functional in 2012. 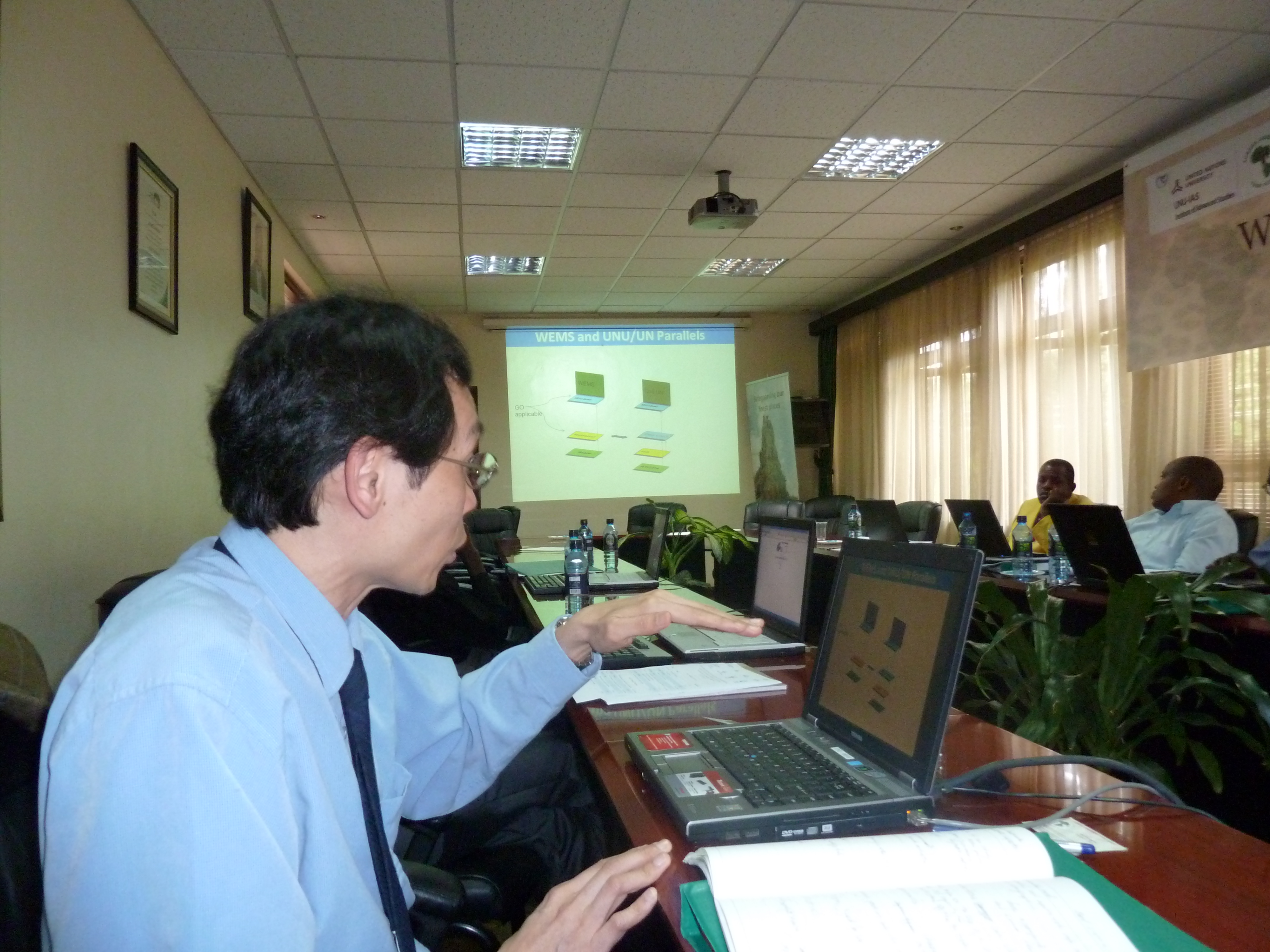 Dr. Ng Chong of UN University explaining about the WEMS data Infrastructure during the WEMS Regional training Workshop in Nairobi

The results of the pilot implementation were showcased during the side lines of CITES CoP 17 held in March 2013. According to Lusaka Agreement, as of 2014, the pilot countries who participated in WEMS had shared around 540 cases across borders.